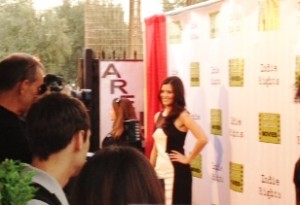 I went to my first “Hollywood” premiere. And even though it was for a small indie film, to me, it felt important. As actors we don’t create work in a vacuum, so having your work premiere for people to see, really is the reason we do what we do. I would be lying if I said that I wasn’t nervous. What if my no one likes the film? My performance? My dress? What if I sound like an idiot? What if I trip? It wasn’t hard to shake-off these petty actor thoughts when I just reminded myself what I am there to do. I am there to support and promote the film that I helped to create. It is our job to always put the story first, and promoting a film is just an extension of that. Once in this head space, nerves went away and I actually had a great time. I spent the evening mingling, conversing about the film and about other films that people had made or are making. Actually, premieres are so cool … cause you meet so many artists who are actively making films. I was struck by a sense of community, which I had heard, doesn’t always exist in Los Angeles. What I’ve learned is that when you can show a genuine interest in someones work, they, might in return, show a genuine interest in yours (key word genuine). This in my mind is Networking. I “worked” the room and spoke to several people about the film they had just scene (mine) and future and past projects of their own.

I also witnessed another form of “working it.” Many actors showed up on the red carpet, (looking absolutely beautiful, I have to say) and “worked” the cameras in ways I’ve never seen. Every pose was a picture. They really knew how to promote themselves on the red carpet. Once the cameras were done snapping, many of the left without seeing the film. I had never seen this before and when I asked a very seasoned actor friend of mine he said that that is actually common practice; your manager or publicist wants you to go to these events to stay visible. Simply put, its good publicity. I get it. Its a part of our job … but … why not stay and see the film? Let me be clear I am not judging … just acknowledging that there are different ways of “working it.” I would be remiss not to point out that on the flip side, the more people show up to a film’s premiere, the better for the film. So for that I am grateful. But for me I got clearer on the kind of actor I want to be. Story is my food. Any opportunity to take in a new film, should not be wasted.